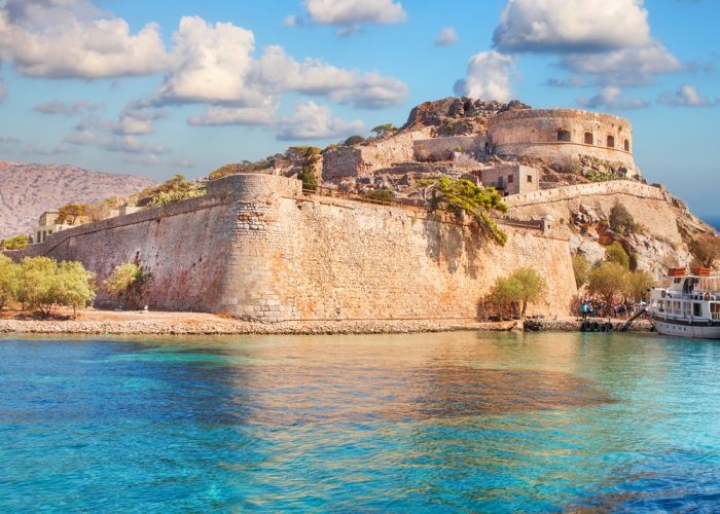 From the eastern side of Crete, you can go with a boat from Elounda or Plaka to the island of Spinalonga.

The island of Spinalonga is in a key position to control the port so the Venetians built a strong fortress there.

During the Venetian period, the fortress was used for military purposes. The buildings that existed inside covered the settlement needs of the guards. During the Cretan war (1645-1669) refugees and revolutionaries (Chainides) took refuge in Spinalonga, and, based on the island, harassed the Turks. Spinalonga remained under the Venetian possession for 65 years after the occupation of the rest of Crete by the Turks (1649) thanks to its strong fortifications.

After the occupation of the island by the Turks in 1715, in Spinalonga, a purely Ottoman settlement was gradually formed. During the first centuries of the Ottoman rule, the fortress was marginalized and used as a place of exile and isolation. But at the end of the 19th c. the situation is changing. The role of the port of Spinalonga is being upgraded as now it obtains an export trade license. In the middle of the 19th c. The island gathers a large number of inhabitants, mostly merchants and sailors, who, taking advantage of the security of the fortified settlement, take advantage of the trade routes of the Eastern Mediterranean area.

The life of this settlement was abruptly interrupted due to the political developments that took place in Crete during the last years of the 19th century. From 1897 and for about a year, French troops were stationed on the island of Spinalonga.

The Cretan State in 1903 established the isolation of lepers and decided to create a Leprosy Hospital in Spinalonga in order to provide a coordinated assistance to those suffering from Hansen’s disease. Initially, all the lepers from Crete and later from all over Greece gathered there. The difficult life of the sick people, who lived on the island until 1957, marked the place and charged it emotionally, making it a place of martyrdom and historical memory.

White houses and beautiful buildings pop up everywhere having the sea as a background.

Agios Nikolaos is the cosmopolitan capital of the regional unit of Lassithi with a population of 20,000 inhabitants. It’s a beautiful quiet little town.

A trademark of Agios Nikolaos is the picturesque Lake Voulismeni, a small lagoon in the city center, used to moor boats. Dozens of legends are associated with it, due to its very deep waters, such as the fact that it has no bottom. The Germans had dropped munitions on the bottom of the lake before leaving Crete in 1944 with many of them still not recovered. A walk around the lake is a very nice calming experience. Other attractions of Agios Nikolaos are the neoclassical buildings, the marina (the first marina in Crete), the island of Agios Pantes with the protected Cretan chamois, the Kitroplatia with its taverns, the pedestrian street with cafes and many more. Also, quite impressive are the stairs that are located almost everywhere, since the city is built in an area with very steep slopes.